All the good stuff from Loran-C, plus:

How are they similar?

How are they different? 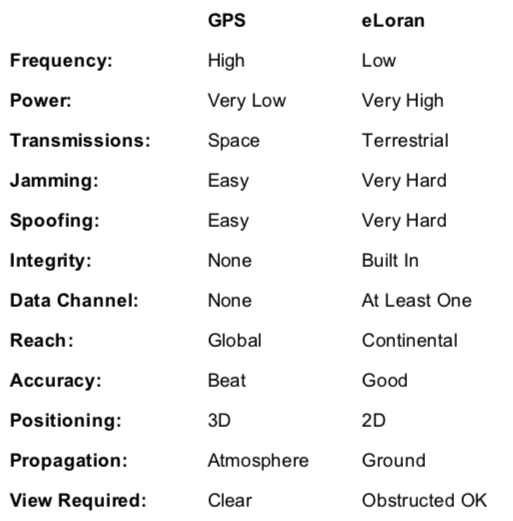 Enhanced Loran, or eLoran, was developed in the United States starting in the mid-1990’s. At that point, it was simply the beginning of the Loran Modernization and Recapitalization Program that the  U.S. Coast Guard (USCG)was undertaking to ensure the system was efficient and effective should it operate beyond 2000. UrsaNav’s CEO, Charles Schue, was the first Program Manager for this effort, until his retirement from the Coast Guard in 2000. With a Congressional mandate to continue Loran beyond 2000, the Federal Aviation Administration (FAA)joined with the USCG to continue improving and advancing the system. The FAA had always been a supporter of Loran, and had paid for installing four new transmitting sites in the mid-continental United States to improve Positioning, Navigation & Timing (PNT) for the aviation community.

eLoran is a major technology upgrade of Loran-C, but can be provided by the same sites and antenna technology used for Loran-C. For example, the U.S. portion of the North American Loran-C system served the CONUS, Alaska, Hawaii, and EEZ. Eighteen stations provided CONUS coverage. A further six stations were located in Alaska. Five stations in Canada provided signals that were shared across the US-Canadian common border, thereby improving PNT service in both countries. At one point, the station in Attu, Alaska operated in partnership with two Russian Chayka stations known as Aleksandrovsk-Kamchatsky and Alexandrovsk-Sakhalinsky. Before their closure in 1993, there were also three “Hawaiian” stations operating.

When GPS was declared fully operational in 1994, the U.S. military eliminated its requirement for Loran-C. In recognition that Loran-C did not meet emerging PNT requirements, the U.S. Government invested over $160M from 1997 through 2010 to modernize and upgrade Loran-C to eLoran. The program was executed with coordination between the USCG and the FAA, and was designed and tested to meet Non-Precision Approach (NPA) performance in support of aviation, Harbor Entrance and Approach (HEA) in support of marine, and Stratum 1 time and frequency in support of communications and network operations. In addition, a variety of policy decisions were made at the U.S. executive level that recognized the value and importance of eLoran. Moreover, government, academic, and industry studies, nationally and internationally, have evaluated the operational and cost-benefit of eLoran and overwhelmingly reported positive findings. A relatively recent and authoritative study was the Benefit-Cost Assessment Refresh: The Use of eLORAN to Mitigate GPS Vulnerability for PNT Services, 11/5/2009 (prepared for the USCG/DHS and FAA/DOT by the John A. Volpe NTSC, U.S. DOT, Cambridge, MA.).